My mother has just headed to Germany to spend some time with my Grandmother, who has been having some health issues. I so wish I could go with her but unfortunately I can't. As a gift for her though, I had a little photo session with the kids. After at least 75 pictures I finally got two that I really liked. We had some silly ones as well, to break things up a bit, but these two really caught my eye. 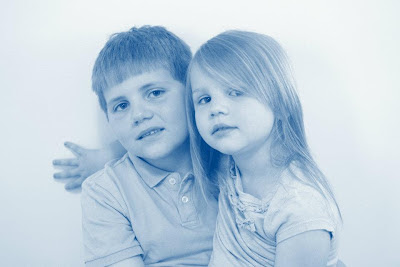 My daughter looks so much older than 5 years old in this picture...a glimpse of the beautiful woman she will become. My son is the gentle big brother, always there for his sister. 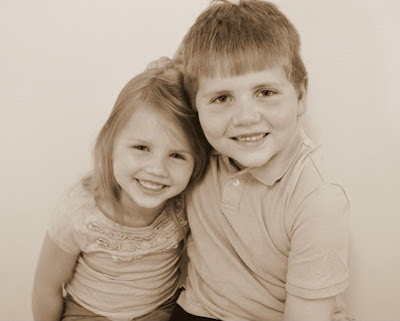 But this is the one I sent to my Grandmother. It might have a few flaws ( little blurriness, mussed hair), but captures the two of them at this time of their lives. Genuine smiles, a twinkle of mischief in their eyes (my son is about to give her Bunny Ears - lol), but they really do love each other. I hope she likes it.
Posted by Melanie at 10:58 AM

Email ThisBlogThis!Share to TwitterShare to FacebookShare to Pinterest
Labels: family

Melanie
Hi everyone! I'm Melanie, a Michigan girl, a wife, and mom to my beautiful son and daughter as well as two lazy felines. I love to try out any kind of art supplies though these days I primarily knit, crochet, make cards & play with stamps. I also work full time at a job I adore so in general I'm pretty busy... I hope you'll enjoy your visit here!

Welcome! Nice to see you!